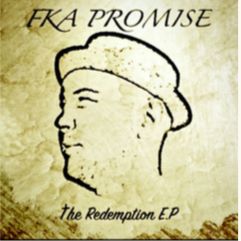 After getting some good feedback from my debut release, “New Revival” I immediately began work on my second EP. I already had bits and pieces of songs which I wanted to restructure and tidy up before putting them out, so a lot of the time has been spent going back over things and making changes. The Redemption E.PFKA PROMISESome of the songs were written just after the release of New Revival.

One of the songs was written 5 years ago when I was still in rehab. The EP is really an eclectic CCM/Modern Worship record, with influences from indie, hip- hop, pop and worship music. I reflect on my journey to salvation, coming from a troubled background, as well as my prayers to see some of my old friends saved, those who are still battling the same demons I once was. There are other songs in which declare the strength and security we find in Jesus, and the power of our Almighty God. It is really a praise and worship album with a range of musical styles brought together for the glory of God, and a natural step forward from my debut EP released in May.FKA Promise is a singer/songwriter, producer multi-instrumentalist and MC. FKA Promise aims to bring together a range of musical styles which reflect his journey.

Having come through a troubled life of pain and addiction, to a new life as a Christian, his music aims to testify to the goodness he has experienced, since being saved. Since his debut release “New Revival” (May 2020) FKA Promise has received some critical acclaim, and was included on Josh Balogh’s (JesusFreakHideout.com) “20 Christian Artists of 2020 You Should Know.”His latest release ”The Redemption E.P” has hit No.5 on the LouderThanTheMusic.com charts