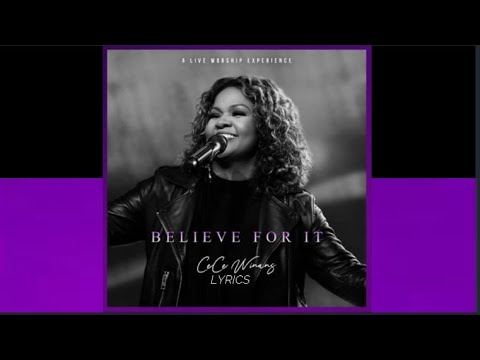 Los Angeles, CA | February, 9 2021  – There’s no stopping the incomparable CeCe Winans.  For over three decades she has consistently rolled out an array of music that has evolved into all-time classics.  Now she’s back with her first live recording taped in Nashville, Tennessee. The highly anticipated

Believe For It is an inviting 78 minutes of worship, offering 12 engaging tracks that highlight some of the biggest songs in Christian music today. Tracks such as, “King of Glory”, “Hunger” and Worthy of It All” will definitely lead fans back to the throne room.

“This album is filled with such powerful songs that need to be heard around the world. I believe

some amazing testimonies will be shared after people listen to this project,” says Winans.

The award-winning trailblazer delivers two new cuts on the upcoming album “No Greater” and the title track, “Believe For It” which is NOW available world-wide, impacts Christian radio on February 26. The single was penned by the collaborative efforts of Mitch Wong, Kyle Lee, Dwan Hill and Winans.  Leaving no stone unturned, this soon to be favorite track is accompanied by a lyric video available on YouTube and other digital platforms for music lovers to sing along.

Winans adds her distinctive sound and style to the contemporary hymns that has been sung in churches worldwide.  The debut tune from the worship collection, “Never Lost” is currently resting in the Top 20 slot at Gospel Radio and was recently nominated for NAACP Image Award in the Outstanding Gospel/Christian category. The single found itself riding a wave straight to the #1 streaming spot on the charts the first week of release and has remained in the top five for streaming songs the last 10 weeks.

CeCe’s long-time fans and new followers can mark their calendars to join her for a night to remember.  Sponsored by Compassion International, Winans is set to host An Evening of Thanksgiving a concert special airing virtually on Sunday, February 21, 2021 featuring Carrie Underwood, Tauren Wells & Marvin Winans. The livestream performances, officially, takes place February 21, but access to tickets and the exclusive livestream will be available until March 7, 2021. Tickets can be purchased directly at https://www.eventbrite.com/e/an-evening-of-thanksgiving-with-cece-winans-tickets-126065993781

It has been four years since Winans’ last (non-holiday) recording of Let Them Fall in Love that marked her return from a decade-long hiatus, but it was worth the wait.  The offering of that musical smorgasbord put an additional two Grammy Awards under the singer’s belt, making it an even dozen.  There is very little space left on the shelf after her 23 Dove Awards and 15 Stellar Awards are added to the display.  Over 17 million fans have purchased Winans’ music world-wide, and after this latest installation, we can confidently predict that number will rise significantly.

Winans has released a myriad of solo and collaborative albums that crossed genres and influenced generations of gospel and secular vocalists. Her mantel today holds a staggering 12 Grammy Awards,

23 Dove Awards and 15 Stellar Awards. She has been inducted into the Gospel Music Hall of Fame, and received stars on the Hollywood Walk of Fame and Nashville Music City Walk of Fame. In addition to being named a Trailblazer of Soul by BMI and garnering multiple NAACP Image Awards, Soul Train Awards and ESSENCE Awards, this music pioneer continues to break through barriers. She has sold 17 million records world-wide, topping the gospel charts repeatedly while managing to cross over with smashes like “Count on Me,” her stunning duet with Whitney Houston, which sold two million copies and cracked the Top 10 on the Pop, R&B, and Adult Contemporary charts. She touched millions more with inspirational performances everywhere from singing before the Pope to The White House.

New single ‘Nights Like This’ aims to give listeners a glimpse into what they and the industry can expect from Asha as an artist.